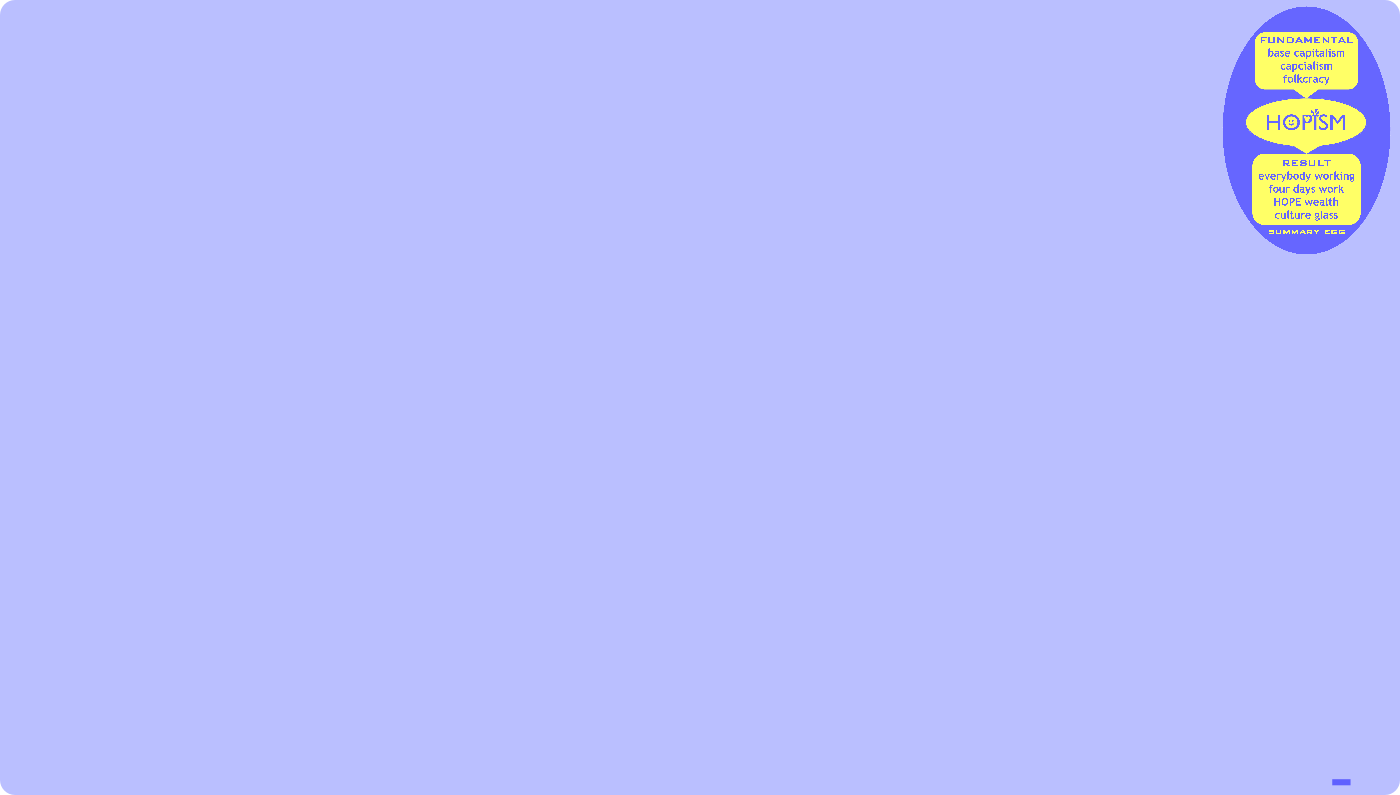 Hopism is political theory written by an ordinary person with ordinary aspirations for life. Hopism recognises and accepts human nature’s weaknesses and strengths and tries to build a realistic framework to create a society of low tax, high social service and low waste.

This is Hopism-Beta-Edition, republished again after a four year break due to background issues. It is still edition 1 and could do with some editing, better english, slicker graphics, some videos and many more diagrams. That will get done sometime during rainy dark November 2014, together with a discussion forum, where this rough idea can be beaten into shape and better written by contributors.

The end result is more useful work done, a happier society and more free time to enjoy your life - whilst knowing that social obligations are met.

Hopism is short and sweet

Hopism is under development, there will be bits you like and bits you dont, maybe there could be different splinter variants. The theory itself is simple and should take less than an afternoon to understand. There are around twenty texts on the webring, each less than a thousand words.

However loanist ownership soon starts to take its toll. Loanism demands its pound of flesh in interest and soon the business profits are being used to repay the interest and even the debt. The debt is moved from the loanist bank puppets to the business and eventually the business is milked until all is paid off. Then the bank and their puppets move on to their next target. Because of these repayments demanded by loanism, the original business has less reinvestment in their product and their product provides lower value for money for the customer. This is decreasing productism.

Eventually loanism mutates into nonetarism as the banks use more and more convulated routes to obtain cashlines to loan out to their hungry loanist puppets. When the day these loans are called, perhaps by a sudden recession, the banks loans are so huge nobody knows where the actual hard capital value their loans are based on exists. That is exactly what happened in 2009 when one trillion pounds was printed and given to insolvent loanist UK banks by the UK government. The loanism was so entrenched in the economy, the banks could not be allowed to fail because financial meltdown would have ensued.

This was a one trillion pound counterfeiting swindle.

There are simple ways to hold back the spreading of loanism such as;

Without constricting loanism, we are making a mockery of capitalist values. With loanism we centralise the economy on loan interest not people or capital goods. Loanism devalues; money, real capital, real productivity, productism, and real wealth. Loanism is a parasitic system that inflates product costs, share values and reduces value for money of goods and quickly infiltrates the economy.

The UK and US economies are particularly afflicted by loanism, with the German economy notably resisting some temptations.

For example, there is no debt at Bayern München, they own their stadium and their ticket prices are reasonable. Bayern München (debt €0) are the iconic German equivalent of Manchester United (debt €850m) and Liverpool (debt €500m).

Sadly loanism is widespread practice and the easy option for banks to make money and remains capitalism´s achilles heel. Instead of clever business people using organic growth and real wealth obtained through productivity and higher sales to improve businesses and bring wealth and value for money to products, nonetarists, the loanist banks and their noney are taking over anything and everything until the whole pile of cards get stacked higher and higher.

Loanism is a parasite that needs capitalism as its host, but like all parasites, it eventually kills the host and that is why we found ourselves in the credit crunch of 2008-10. Unfortunately instead of letting those banks die, many were rescued, which leaves us with a legacy of loans and noney still to be paid from somewhere in the future by devaluation of labour and real capital goods.